Eyes are so delicate organ of your body yet carry tremendous visual and aesthetic functions. This is why there are numerous insdustry eyecare products aiming to strip of your pocket in different ways. While most of them are simply placebo without any real effects, some others require an extended period of usage to keep your eyes in expected conditions. This is not to mention the unwanted amount of chemical substance that you welcome into your body through the way of commercial treatments.

If the above are also your concerns, then castor oil is a perfect natural solution for your eyes problems. A long time ago, ancient people, ie. Egyptian pharaohs, Persian and Chinese already started to discover the amazing benefits of castor oil for eyes. Till now, castor oil has become one of the most popular restorative home remedies used widely by celebrities and housewives globally. This article will discuss why castor oil works for eyes, what problems it can fix and how to apply it onto your eyes, and finally show you some tips in buying and using castor oil for eyes. 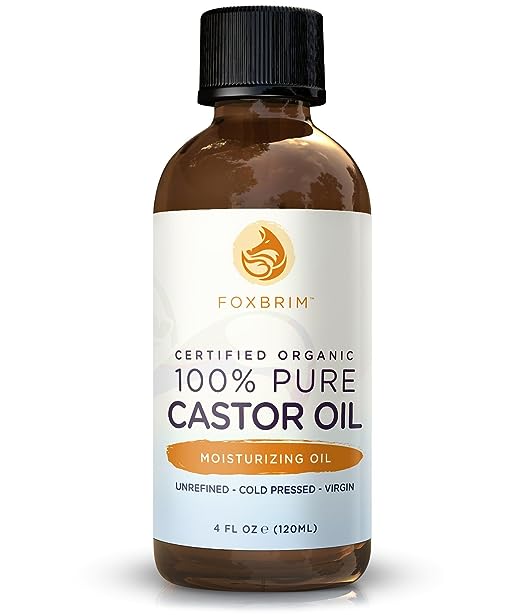 Why castor oil is useful for eyes treatment?

Castor oil is rich in fatty acid and 90% of which is ricinoleic acid. Such ingredients make castor oil not only a home remedy for skin but also an inexpensive natural treatment for your eyes. Besides, castor oil has that amazing ability rarely seen in other vegetable oils which is to deeply penetrate into the skin and dissolve impurities stuck in existing oil of the face. Therefore, castor oil possesses the cleansing, anti-bacteria, anti-inflammatory and nourishing properties that might tailor well with every eyes problem you may have.

You may also like: castor oil for hair growth

What are the benefits of castor oil for eyes?

As we age, the thin skin beneath your eyes suffer from increasing shortage of collagen, thus get thinner and allow green veins to expose, creating dark circles. Stress, sleep deprivation, unbalanced diet are also associated with dark circles. Castor oil can help your skin rejuvenate and fade away those dark cirlces.

You can either apply castor oil alone or use it in combination with other ingredients to balance out strong effect of the acid in it. For instance, a mixture of castor oil and cream, coconut oil, milk or almond oil is particularly suitable for sensitive skin. The combined formula is also useful if you simply want to carefully test how your skin react to castor oil before you decide to use it for an extended period.

Long lashes bring your eyes a dreamy and attractive look that every women desire. But not everyone is fortunate enough to have long and thick eyelashes when born. Additionally, just like hair, eyelashes fall down from time to time and have limited ability to regrow. In these cases, you can resort to castor oil as it is capable of growing and thickening eyelashes. Besides, castor oil can prevent your eyelashes from breaking and falling down by adding nutrients to keep your lashes healthy and resilient.

It is adviced that you apply oil treatment on eyes at night on a regular basis till you get the desired result. In the morning, you should clean the oil using cotton pad and eye make-up remover.

Wrinkles are troublesome by-product of the aging process that obsess all women. But many commercial brands are too expensive when it comes to eye care products. Then castor oil has emerged to be an economical and green alternative to budget housewives and vegan lovers. With its emolient and absorbing properties, castor oil fights against even the most stubborn wrinkles of your eyes.

Dry eyes is an eye aliment that affects more than 60% of the world’s population. Lack of lubrication in the eyes is the major cause of this condition. Signs that indicate you have dry eyes include blurred vision at night, after working on the computer or eye pain after waking up in the morning. The best natural remedy you can resort to in such cases is pure castor oil.

Take a clean dropper to store pure castor oil and administer one drop in each eyes. Repeat the application twice or three times a day if you want the condition to improve quickly. But experts advise that castor oil for dry eyes is best when applied just before bed time on a regular basis till the problem is cured.

One amazing benefit of castor oil is to dissolve cataracts early before it progresses to late stages. Daily use of castor oil can cure cataracts within 2 to 6 months subject to the degree of development. Do not use castor oil for bath or oil packs. Make sure that the oil you use is pressed organic castor oil. High grade castor oil can be found easily on eBay, Amazon and local pharmacies.

Each night, at bed time, use a clean drop bottle and place one drop in both eyes. As you sleep, the oil will work better to fix the cataracts without interfering with your vision.

Burning sensation, redness, pink-eye occuring around the eyelids are some examples of eye aliments associated with inflammtory and infective bacteria. Castor oil is the number one home remedy to cure inflamed eyes. Every household should store at least one jar of castor oil as an herbal first aid medication for family use.

Drop castor oil using clean dropper to the infected eye. Also remember to use the organic pressed castor oil of high quality only. You can use your ring finger to rub the oil around gently for it can deeply penetrate into the beneath layers of skin to kill the bacteria.

What are some important notices when using castor oil for eyes?

As eyes are very sensitive and delicate, you must choose high grade castor oil for eye uses. Additionally, you should always make sure that you are using the refrigerated pressed castor oil whenever you apply it onto the eyes or eyes skin. Although castor oil rarely incur side effects when used in moderation, experts advise that you should alway watch how your eyes react to castor oil before carrying on a prolonged application.

In general, castor oil for eyes is such an economical and effective herbal treatment that every family housewives should have at least one in their fridge.

Healthoop.com is a participant in the Amazon Services LLC Associates Program, an affiliate advertising program designed to provide a means for sites to earn advertising fees by advertising and linking to Amazon.com. Additionally, Healthoop.com participates in various other affiliate programs, and we sometimes get a commission through purchases made through our links.